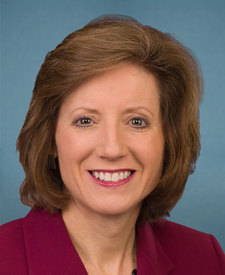 Biography:
Vicky Hartzler is the Representative for Missouri's 4th Congressional District, having been elected to that position on November 2, 2010. She was born October 13, 1960 in Cass County, was raised on a farm in Archie, and lives with her husband, Lowell and daughter, Tiffany, on a working farm in Cass County. She is a graduate of both the University of Missouri-Columbia in 1983 and Central Missouri State University (now University of Central Missouri) in 1992, graduating summa cum laude with a B.S. in Education from MU and a M.S. in Education from Central Missouri. She was first elected to political office in November of 1994 as the State Representative from Missouri's 124th District. She served three terms, leaving in January of 2001. Prior to her time in politics Vicky taught family and consumer sciences for 11 years in Lebanon and Belton. In 2004, she served as spokesperson for the Coalition to Protect Marriage, a state constitutional amendment which passed resoundingly and led to Missouri recognizing traditional marriage as a union of a man and a woman. In 2005, she was appointed as Chair of the Missouri Women's Council, serving for two years. Vicky has served as a member of the Cass County Republican Central Committee since 1990. Vicky has served in a number of capacities as a member of several organizations: Secretary/Treasurer of Cass County Republican Women from 1985-1987, American Home Economics Association, the Harrisonville Chamber of Commerce, Missouri Farm Bureau, Missouri State Teachers Association, Missouri Vocational Association, Pleasant Hill Chamber of Commerce, and the University of Missouri Alumni Association. Vicky and Lowell Hartzler own a company with three farm equipment stores in the 4th District. The Hartzler family lives near Harrisonville in Cass County. [10/2014]
Other Ratings:
These ratings show how each elected official's voting record lines up with the policy and issue agendas of various organizations across the political spectrum.
American Federation of Labor and Congress of Industrial Organizations (AFL-CIO) - 113th Congress
14%
National Association of Manufacturers (NAM) - 116th Congress
100%
National Federation of Independent Businesses (NFIB) - 113th Congress
100%
U.S. Chamber of Commerce - 113th Congress
77%