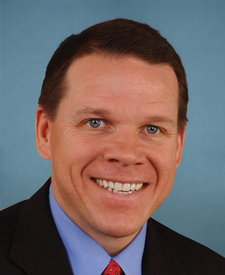 Biography:
Congressman Sam Graves is a life long resident of Missouri's Sixth Congressional District. As a small businessman and a sixth-generation, full-time family farmer, Sam spent his life working to make Missouri a better place to live, work, and raise a family. In Congress, Sam serves as the Chairman of the Small Business Committee. Small businesses create 7 out of every 10 jobs in this country. It is important that our policies encourage innovators and entrepreneurs to follow their dreams and create jobs. Sam also serves on the Transportation Committee where he continues to fight for Missouri roads, rivers, bridges, rail lines and airports. Congressman Graves was born in Tarkio, Missouri on November 7, 1963. He graduated from Tarkio High School in 1982 and attended college at the University of Missouri-Columbia, where he received his degree in Agronomy from the School of Agriculture. In 1992, Sam won his first race for State Representative. In 1994, Sam was elected as State Senator for the 12th Senatorial District and was subsequently re-elected in 1998. Sam's leadership has not only been recognized by his constituents, but from organizations like the Missouri Chamber of Commerce, the Small Business Development Corporation, and the Missouri State Medical Association. As a father, farmer, businessman, and former State legislator, Sam knows first hand the values, hopes, and beliefs of the hard-working families of the Sixth District, and will continue to work tirelessly for them in the United States House of Representatives. As your Congressman, Sam will continue to fight for Missouri families. [10/2014]
Other Ratings:
These ratings show how each elected official's voting record lines up with the policy and issue agendas of various organizations across the political spectrum.
American Federation of Labor and Congress of Industrial Organizations (AFL-CIO) - 113th Congress
19%
National Association of Manufacturers (NAM) - 116th Congress
100%
National Federation of Independent Businesses (NFIB) - 113th Congress
100%
U.S. Chamber of Commerce - 113th Congress
85%