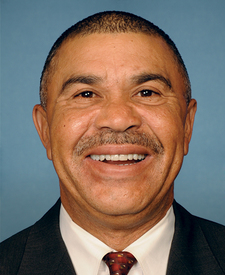 Biography:
Congressman Wm. Lacy Clay was first elected to the U. S. House of Representatives in 2000, succeeding his father, the Honorable Bill Clay, who served for 32 years and was a founding Member of the Congressional Black Caucus. Prior to his election to the U.S. House, Mr. Clay served for 17 years in both chambers of the Missouri Legislature. The Congressman, who is serving his 7th term in the U.S. House, is a senior member of the powerful House Financial Services Committee. He is the Ranking Member on the newly-created House Financial Services Subcommittee on Domestic & International Monetary Policy and Technology. This key subcommittee will have major oversight responsibilities over the Federal Reserve, the Export-Import Bank of the United States, the World Bank and the International Monetary Fund. Mr. Clay also serves on the Oversight and Government Reform Committee, which has major oversight and investigative responsibilities for the operations of the federal government. Wm. Lacy Clay is a native St. Louisan. He is a graduate of the University of Maryland. Mr. Clay also holds honorary degrees from Lincoln University, Harris-Stowe State University, the University of the District of Columbia and Logan College. Congressman Clay is the proud father of Carol and Will. He resides in St. Louis and attends St. Nicholas’ Catholic Church. [10/2014]
Other Ratings:
These ratings show how each elected official's voting record lines up with the policy and issue agendas of various organizations across the political spectrum.
American Federation of Labor and Congress of Industrial Organizations (AFL-CIO) - 113th Congress
100%
National Association of Manufacturers (NAM) - 116th Congress
0%
National Federation of Independent Businesses (NFIB) - 113th Congress
0%
U.S. Chamber of Commerce - 113th Congress
46%