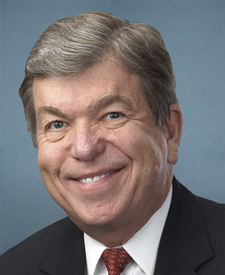 Biography:
Building on a background as a public servant, university president, and teacher, United States Senator Roy Blunt was elected by the people of Missouri to the United States Senate in 2010. Senator Blunt is a member of the Senate Appropriations Committee; the Senate Commerce, Science and Transportation Committee; the Senate Armed Services Committee; and the Senate Rules Committee. He serves as the Ranking Republican on the Appropriations Subcommittee on Agriculture, Rural Development, Food and Drug Administration, and Related Agencies. Blunt is also the Ranking Republican on the Commerce Subcommittee on Surface Transportation and Merchant Marine Infrastructure, Safety, and Security. Less than one year after he was sworn into the U.S. Senate, Blunt was chosen by his colleagues to serve as a member of the Senate leadership as the Vice Chairman of the Senate Republican Conference. Blunt also serves as a member of the Senate Republican Whip Team. From 1996-2008, the people of Southwest Missouri overwhelmingly elected Blunt seven times to the U.S. House of Representatives. Blunt was elected by his colleagues to serve as House Majority Whip and Republican Whip three times, and he became the Majority Whip earlier in his career than any Member of Congress in eight decades. As Whip, the second highest Republican in the House, he led a team of deputies and assistants that columnist Robert Novak described as “the most efficient party whip operation in congressional history.” Before serving in Congress, he was a history teacher, a county official, and in 1984 became the first Republican elected as Missouri’s Secretary of State in more than 50 years. Senator Blunt also served four years as the president of his alma mater, Southwest Baptist University in Bolivar, Missouri. Senator Blunt is a member of the Smithsonian Council for American Art and is a Trustee of the State Historical Society of Missouri. The Senator is married to Abigail Blunt and has four children: Matt Blunt, Missouri’s 54th Governor; Amy Blunt, an attorney in Columbia, Mo.; Andy Blunt, an attorney in Jefferson City; and Charlie (age 9). Blunt has six grandchildren: Davis Mosby, Ben Blunt, Branch Blunt, Eva Mosby, Allyson Blunt, and Brooks Blunt. [7/2014]
Other Ratings:
These ratings show how each elected official's voting record lines up with the policy and issue agendas of various organizations across the political spectrum.
American Federation of Labor and Congress of Industrial Organizations (AFL-CIO) - 113th Congress
17%
National Association of Manufacturers (NAM) - 116th Congress
100%
National Federation of Independent Businesses (NFIB) - 113th Congress
100%
U.S. Chamber of Commerce - 113th Congress
88%