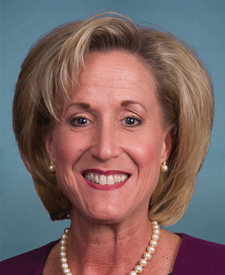 Biography:
Ann Wagner’s career is both deep and broad in service to her hometown, state and nation with over 25 years of work in the private sector, community and public service, and the political arena. The 2nd District means family for Ann. It is where she and her husband of twenty-five years, Ray, grew up, went to school, raised their children, work, volunteer and go to church. This community has given her extraordinary opportunities to make a difference. At an early age, Ann started working in the family business, a retail carpet store called Carpetime in Manchester. Working beside her parents she learned the value of a dollar, a strong work ethic, honesty, integrity, and that government ought not be in the way and on the backs of hard-working Americans trying to make a living. Ann then took her firsthand experience to the University of Missouri-Columbia and received her BSBA from the Business School with an emphasis in Logistics. After college, Ann went to work in the private sector and held management positions at Hallmark Cards in Kansas City and Ralston Purina in St. Louis. Ann’s most important jobs, however, have always been as a wife and mother. Ann and Ray have three children: Raymond, a recent West Point graduate stationed at Fort Campbell with the 101st Airborne; Stephen, a senior at Washington University in St. Louis; and Mary Ruth, a high school senior at Ursuline Academy. Ann Wagner’s public service began at the grassroots level. She served for nine years as a local committeewoman in Lafayette Township and went on to Chair the Missouri Republican Party delivering historic Republican gains. She also served as Co-Chairman of the Republican National Committee during the first term of President George W. Bush. In 2005, following nomination by President Bush and confirmation by the U.S. Senate, Ann was sworn in as the 19th U.S. Ambassador to Luxembourg by Secretary of State Condoleezza Rice. She served as U.S. Ambassador for four years before returning to her home in Ballwin, Missouri. In 2010, Ann was asked to serve as the Chairman of Roy Blunt's successful U.S. Senate campaign in Missouri. Bringing her high energy and political skills to the campaign, Ann helped unite existing and new conservative grassroots activists to produce a landslide victory. Ann announced her first run for public office on April 26, 2011 and has attended hundreds of events including forums, debates, picnics, meetings and rallies. Her signature grassroots “Table Tops” have been a listening and learning tour in homes all across the district. Her strong connection to her community has helped Ann recruit hundreds of volunteers from every corner of the 2nd Congressional District. Ann won her 2012 Congressional race with over 60% of the vote and received more votes than any other Republican candidate for Congress in the State of Missouri this cycle. Ann will serve on the House Financial Services Committee – a key committee for the 2nd District and St. Louis region. St. Louis and its suburbs are national and regional centers for financial services activity. Over 84,000 people in St. Louis and its suburbs are employed in the financial services industry with a total payroll of around $4.57 billion. The St. Louis area is also home to national investment firms including Edward Jones, Scottrade, Stifel Financial and Wells Fargo Advisors, to name a few, making it one of the largest clusters of brokerage firms and personnel outside of New York. Ann was also selected by the Freshman Class of the 113th Congress to be their representative on the Elected Leadership Committee. [10/2014]
Other Ratings:
These ratings show how each elected official's voting record lines up with the policy and issue agendas of various organizations across the political spectrum.
American Federation of Labor and Congress of Industrial Organizations (AFL-CIO) - 113th Congress
15%
National Association of Manufacturers (NAM) - 116th Congress
100%
National Federation of Independent Businesses (NFIB) - 113th Congress
100%
U.S. Chamber of Commerce - 113th Congress
85%