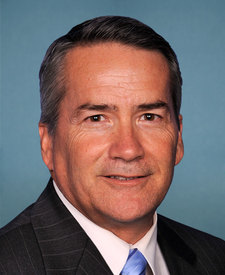 Biography:
Jody Hice was born in Atlanta and grew up in Tucker where he ran track and played football at Tucker High School. For over 20 years, Jody and his wife have lived in the 7th congressional district. Jody and his brother, Thomas, learned the values of hard work and integrity from their dad who owned Hice Construction, a concrete and commercial roofing business. After graduating from Tucker High, Jody left Georgia to attend Asbury College in Wilmore, Kentucky, where he earned his undergraduate degree. During those college days, Jody met the love of his life, Dee Dee, with whom he is about to celebrate 28 years of marriage. Jody continued his education, earning his Masters degree at Southwestern Seminary in Fort Worth, Texas. He later earned his Doctorate from Luther Rice in Atlanta. Obviously, one of the big problems in our government today is that the professional politicians clearly are not listening to the people. “As a pastor, I spent the vast majority of my time carefully listening to the needs and dreams of individuals and families, celebrating the good times with them, and encouraging them and helping them through difficulties. My experience and history of listening to and serving people uniquely qualify me to be the kind of Congressman that people want,” Jody says referring to his 12 years as senior pastor of Bethlehem First Baptist Church in Barrow County. In 2003 Jody was thrust into the public arena when the ACLU instigated a lawsuit against the Barrow County Board of Commissioners to force removal of a display of the Ten Commandments from the county’s Courthouse. Viewing this as an attack upon the freedom of religious expression and upon the cultural and spiritual heritage of our nation, Jody founded Ten Commandments – Georgia, Inc. to raise money to pay for the county’s legal defense, saving taxpayers hundreds of thousands of dollars. Shortly thereafter, Jody established Let Freedom Ring, Inc. to continue defending constitutional liberty. LFR sponsors The Jody Hice Show and Hope for America Rallies across the nation. In September 2008, Jody joined with 33 pastors in challenging an IRS code that threatened churches with loss of tax-exempt status and with criminal sanctions if they addressed political issues from the pulpit. Hice took his bold stand by formally endorsing a candidate in his sermon and sending a copy of it to the IRS. The IRS backed down. Jody is a member of the NRA and Gun Owners of American and is an ardent advocate of the Second Amendment right to keep and bear arms. Jody and Dee Dee Hice reside in Walton County. They are the parents of two adult daughters, and will soon be grandparents.
Other Ratings:
These ratings show how each elected official's voting record lines up with the policy and issue agendas of various organizations across the political spectrum.
American Federation of Labor and Congress of Industrial Organizations (AFL-CIO) - 113th Congress
0%
National Association of Manufacturers (NAM) - 116th Congress
100%
National Federation of Independent Businesses (NFIB) - 113th Congress
0%
U.S. Chamber of Commerce - 113th Congress
0%